In 1881 a regular public transport service with mechanically-propelled vessels began in Venice. In the autumn of the same year, on the occasion of the "Congresso di Geografia" (Geography Congress), the first waterbus, named "Regina Margherita", appeared on the Grand Canal. After the "Regina Margherita" experiment, a limited liability company called "Compagnie des bateaux Omnibus" was set up with French funds in Paris. After it was granted the licence to carry people on the Grand Canal route, it began the construction of 8 boats at the French shipyards of Rouen. In this way, sailing down the Languedoc Canal in France and circling Italy, the first eight waterbuses from Rouen reached Venice. At first, gondoliers looked upon waterbuses as terrible competitors and set themselves against the enterprise. However, the benefits introduced by these new means of transport appeared very soon evident and the initial reservations of Venetians turned into real enthusiasm. 1890-1911
In 1890 the Società Veneta Lagunare (Venetian Lagoon Company) (S.V.L.) replaced the French Company and extended the service to the areas of the Lagoon outside the City, providing connections with Fusina, San Giuliano, Cavazuccherina and Torcello. In 1903 the Municipal Council aimed at taking direct control of the inland waterbus services and, after having carried out a public-opinion survey with a referendum, founded the Azienda Comunale per la Navigazione Interna (Municipal Company for Inland Navigation) (A.C.N.I.). A.C.N.I. therefore took over all the inland waterborne routes from S.V.L., also purchasing the fleet that was being used for these (23 vessels with a carrying capacity of 2,860 passengers per day). The situation remained unchanged for the following 26 years.

1930-1937
On 1 January 1930 the Municipality of Venice bought in bulk the fourteen vessels from the Società Veneta Lagunare destined for the Chioggia, Burano and San Giuliano routes. A.C.N. I. became A.C.N.I.L. - Azienda Comunale di Navigazione Interna Lagunare (Municipal Company of Lagoon Waterborne Transport) and at the end of the same year it boasted 57 vessels which could carry 11,750 passengers. In the meantime the works for the construction of the road bridge allowing motor vehicles to reach the new Piazzale Roma terminal were proceeding fast. With the opening of the new motor vehicle bridge linking Venice with the mainland (25 April 1933) the Municipality of Venice entrusted the control, accounting, ticket supply and supervision of the Venice-Mestre routes to A.C.N.I.L.. Under the terms of the contract, these routes were run by the company "Tramvie di Mestre". During the same period the Rio Novo building works were completed. In order to let traffic go through this new canal (it considerably shortened the journey time from the road terminal of P.le Roma to St. Mark's Square) A.C.N.I.L. built 8 smaller waterbuses, which were very easy to handle and named them after 8 illustrious Venetian palaces. It was during this period that disputes intensified on the damage caused by wave motion to the foundations of the buildings. Research and studies aimed at reducing the damaging effects of wave motion were thus begun. Some bow propellers designed in Germany were tested; the Rio Novo smaller waterbuses were fitted with blades able to correct the wash left by the propellers, but above all new hulls were studied and designed, which in the end give excellent results for the control of the wave-damage phenomenon. This period heralded the start of a continuing commitment by Venice's public transport company of studies and experimentation on how to reduce the wave damage.

1940-1944
Until 1940 public transport on Lido Island was provided by a somewhat-meagre electric tramway managed by "Compagnia Italiana dei Grandi Alberghi" (Italian Company of Grand Hotels). On 1 January 1941 the tram service was replaced by an A.C.N.I.L. bus service. At the same time, in spite of the serious problems caused by the war, the construction of the trolley-bus system began: 14 double-axle trolley-buses made up the vehicle fleet. In the meantime, from 10 June 1940 (the date when war broke out) the Navy and the Army requisitioned many of ships. At the end of the war, when it was time to think about rebuilding, A.C.N.I.L. found many of those ships all around Italy, sunk, wrecked and machine-gunned. The Torino steamship was found shipwrecked near Messina. The Roma steamship was salvaged after sinking in the Giudecca Channel. The Aquileia foot-passenger ferry, which had also sunk, was salvaged at Leghorn. The Altino ferry was found sunk, in the French port of Marseilles. Scores of other vessels were recovered in the Venice Lagoon.

1948-1990
After the War, the Company decided to organise the rebuilding of the fleet with its own staff. A special technical-financial plan for the rebuilding works was therefore prepared, a plan that was then duly carried out. Foot-passenger ferries and steamships were changed; landing piers, landing stages and pontoons were built. Larger and smaller waterbuses were built and all the services were reorganised in 1950. In 1965 the "Azienda Municipale" ("Municipal-Owned Company") began to work in the area of road transport, running the urban services of Mestre and Marghera that had already been entrusted to "Società Filovie Mestre". All the trolley-buses went on to be replaced by fuel-powered buses and on 21 December 1966 the last Mestre trolley-bus route performed its service. The fast growth of the city with the building of important roads (such as the Marghera flyover and the San Giuliano junction) obliged the Company to increase its services and the resources used. After the setting up of the "Consorzio Trasporti Veneziano" (Venice Transport Consortium), with the subsequent publicising of the company "Società SVET", the "Azienda del Consorzio Trasporti Veneziano" (A.C.T.V.) - the Venice Public Transport Company - was founded and began operating on 1 October 1978. The companies ACNIL, SVET and SVA converged into it from the outset, followed by other smaller companies.

From 1991 ...until now
Since 1 January 2001 Actv turned into a corporation in compliance with the guidelines of Legislative Decree 422/97 (Burlando) and Regional Law 25/98. Share capital was established as liras 90,546,181,264 (equal to 46,763,200 Euros) divided into 467,632 shares worth a par value of liras 193,627 (equal to 100 Euros each). The company is a local corporation under article 22 paragraph 3, letter E of Law 142/90 and capital shall be held, throughout the duration of the company, by the founding shareholders to an extent of not less than 51%.
Currently Actv S.p.A. owns approximately 620 buses and 160 boats and 150 floating pontoons (2010 data).
Every year it carries more than 190 million passengers and produces approximately 520,000 hours of navigation and 33 and a half million kilometres in the bus division (2010).
In January 2006 the company offices were moved to the new headquarters at Isola Nova del Tronchetto 32, creating a hub right in between the City Centre and the bus depot of Via della Libertà.
Actv S.p.A. lately has developed a great focus on environmental problems and protection, respect and promotion of cultural heritage, by purchasing in 2008 and 2009 10 300-series large vessels and 7 low environmental impact breakwater motor vessels sitting 400 people and a series of methane-powered buses.
On Venice Lido island, in 2010 a trial was started with the use of low CO2 mixed fuel.
The Mestre urban service has been constantly adjusted to make the new railway subways and to accommodate the tram rails, while making significant additions and changes to the service, especially by setting up lines H1 and H2 and some route extensions to the new dell'Angelo Hospital.
Equally important has been the development of the waterborne routes and to adjust the offering, especially by introducing the Rialto Mercato (2007) and S.Pietro di Castello (2008) stops and reorganizing route LN P.Sabbioni-Lido-S.Zaccaria and the beach services.
In 2009 the corporate fleet flagship, NT Lido di Venezia, started operation, carrying 100 cars.
Again in 2010 the Court of Venice, by action of 4 April/02/2010, approved the application for arrangement with creditors by Cantiere Navale De Poli Spa, company under liquidation, starting insolvency proceedings to transfer the business to the best bidder. Actv, after making appropriate in-depth analyses, on 10/12/2010 submitted an irrevocable purchase bid for the business complex worth 12.3 mln/€, coming out as the best bidder.
The purchase of the business complex “Ex Cantiere De Poli” located on the Pellestrina island, reshaped the project of the new organization of Actv shipbuilding. In fact, the initial project provided for the transfer of the current S. Elena shipyard to Tronchetto (estimated cost of approximately 30 mln/€) and the restructuring of the Arsenale industrial site making it more suitable to such use.
Being awarded the business complex ex Cantiere De Poli opened up new reorganisation perspectives of the company shipbuilding, having a larger production site available (24,950 sqm vs 15,100 sqm of Arsenale) and greater production capacity, provided with a floating dock of such size as to allow for the maintenance of larger boats, including NT Lido di Venezia; to replace the Arsenale site, converting the established investment into an investment in the restructuring of Arsenale. On 20 December 2010, the first section of the Mestre tram system started operation. The PMV-made system so far provides for a first 5.82 km-long tram section, from Favaro to Mestre, via Sernaglia, corresponding to an annual travelled distance of over 390,000 km/tram car.
As concerns services to disabled passengers, the company has made a strong commitment and has taken multiple measures in the past years. Firstly, all the new purchased buses are provided with bridge plate and reserved seat. Using these new buses, Actv was able to equip some lines (signalled on the stop poles) to meet the needs of disabled people (“Actv EASY BUS” project). In Piazzale Roma a reserved stop was created for this category of users. The front-line staff is adequately trained both in class and during hands-on lessons, in partnership with Disabled Associations, to supply a high-quality service. The plates operation is constantly monitored by COSES (the Venice Research and Training Consortium).
In addition, in partnership with UILDM (Italian Union against Muscular dystrophy), leaflets were prepared for an easier access to the floating city.
On 31 August 2012, the new Venice mobility holding was introduced by Mobility Councillor during a press conference at the City Hall; the target was to save total costs and to create a synergic and coordinated action within the city mobility sector, while respecting the independence of each participating company, Avm (former Asm), Actv, Vela and (shortly) Pmv.
Parent company of the holding, AVM and its CEO Giovanni Seno.
On 20 August 2013 the new Venezia Unica city pass was introduced by the City of Venice to access local cultural and tourist services in addition to transportation.
On 1 July 2015, the tariff restructuring, introduces the concept of "Rete Unica" (single network).
On 16 September 2015 the tram arrives in Venice.

Actv provides transport services on both land and water. The company has fleets of water- and land buses for services in the centre, suburbs and out of town. 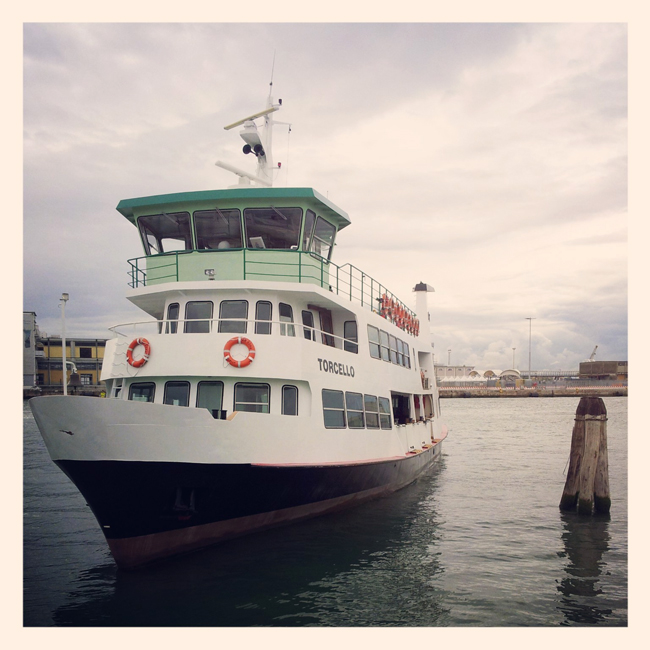